JADE MACMILLAN, HOST: Time now for today’s political panel. I’m joined by the National Senator Perin Davey, and the Shadow Minister for Early Childhood Education Amanda Rishworth. Perin Davey, what to make of that shocking image posted by China’s Foreign Ministry and does this represent a new low in the relationship between Australia and China?

PERIN DAVEY, NATIONALS SENATOR FOR NEW SOUTH WALES: The image beggars belief. It’s one thing to say they are shocked by – and I would say allegations, they didn’t say allegations – but it’s one thing to say they are shocked by the Brereton report and the information contained therein, it’s safe to say we all are shocked by that and we are all taking it very seriously, our government is taking it seriously. But then to post an absolutely childish photoshop image – it’s not even been done very well – is appalling. And whoever thought that that was a good idea for an official Chinese Government Twitter account, I think really needs to be held to account themselves. I think what we have done as a government to contact the Chinese and ask for an apology is right. But also Twitter, I mean Twitter is so quick to slap a fake news warning on every Donald Trump tweet there is, to let this go up when it is clearly a fake image, and when it contains misinformation. I think Twitter needs to act immediately to take down this deplorable image, that really is abhorrent and shows that it is a new low in our relations, I believe.

MACMILLAN: Amanda Rishworth the Prime Minister has described the post as repugnant, he has called for it to be taken down and has called for an apology, what do you think about that response from Scott Morrison?

AMANDA RISHWORTH, SHADOW MINISTER FOR EARLY CHILDHOOD EDUCATION AND DEVELOPMENT: I think it’s the right response, we do need to call this out. I do think it is misleading, and is not becoming of a large foreign power. There needs to be restraint shown and accuracy shown. I think that’s absolutely true.

I would add we need the Government more broadly to have a constructive relationship with China, to have a way to engage where differences can be resolved and a plan to do that. I think things like this do need to be aired, but hopefully if you have a good diplomatic relationship, you are able to have that discussion country to country.

MACMILLAN: Perin Davey how concerned are you about the state of the relationship between Australia and China, and do you worry this latest escalation could have further consequences?

DAVEY: It is very concerning the decision by China to apply tariffs, firstly to our barley, now to wine, and not insignificant tariffs. In New South Wales we have fantastic wine producing regions, Orange, Mudgee, the Hunter region, Griffith near my home town, and all of our wine producers are very concerned about what this means for their businesses. But what our barley producers have shown is that there is a light at the end of the tunnel. Our barley prices, I’m being told by farmers, have held up, despite China applying tariffs, so we have very resilient agricultural producers in this country. We have the best produce in the world, I think, and what we need to focus on as a government is yes, we need to improve our relationship with China. Yes, we need to respond to these accusations of China with fact, because we can prove that we are not dumping wine on China. We respond with fact, we have those negotiations, but at the same time, we need to lay the groundwork so that we have other export markets. And our government is committed to doing so. We have negotiated multiple free trade agreements since we have been in government in 2013 and we will continue to work on that. We are working with the EU and the UK, we need to make sure the markets are there, we need our exporters to look at those markets so that we are not so dependent on one nation and one market place. At the same time we should continue to work constructively and diplomatically with China. Produce the facts, so we can allay their concerns and get our products back into that market and into every other market that we can.

MACMILLAN: Amanda Rishworth on that issue of barley tariffs, the Trade Minister has flagged taking China to the World Trade Organisation. Is that the right approach or could that further inflame tensions and perhaps leave other Australian producers worse off?

RISHWORTH: I guess we are starting to see the Government put up a number of thought bubbles on how they could deal with these escalating trade issues. I think what we really need to see from the Government is a plan in place, some explanation about how they are going to manage this relationship. We have seen a number of backbenchers use very inflammatory language when it comes to China, with no rejection by the Prime Minister or senior Ministers. They have been not really, in my mind, disciplined at managing this relationship well, no real plan. And I would disagree, I haven’t seen this government really work very hard on developing good, really strong trading relationships with say for example India. They could do a lot more when it comes to diversifying our export markets and they haven’t been in the last number of years really actively pursuing as many relationships as they could and I think that is concerning, especially when we find ourselves where we are today. I think the government needs to have a plan, the Trade Minister putting up thought bubbles, shrugging his shoulders saying “not much I can do, my phone calls aren’t being returned” is probably not very reassuring to our agricultural producers right across the country. They need some reassurance at the moment and would like to see that from this government.

MACMILLAN: I want to move to Australia’s economic recovery from COVID-19. The government has been talking up these figures today showing a fall with the number of people receiving JobKeeper, but Perin Davey there are a lot of Australians really struggling. Is it too early to be celebrating?

DAVEY: I don’t think anybody is celebrating, what we are doing though is highlighting that we were expecting things to be much, much worse. We had originally budgeted for the December quarter to see 2.2 million Australians on JobKeeper. The numbers that are out today are that there is only 1.5 million Australians still dependent on JobKeeper, and that is because businesses are recovering faster than we expected. The difference, the 700,000 less people on JobKeeper than we expected, is due entirely because businesses don’t meet the downturn criteria that was placed there, because they are doing better than expected. And I think we need to recognise when we are doing well, we shouldn’t constantly focus on the negative because negative breeds negative. I think we are not celebrating, we know there is a very long road ahead, there is much work to be done, we can’t take our foot off the pedal so to speak, but we should acknowledge when we are doing well and that is what we are doing. When we look at these JobKeeper figures, when we see that 650,000 jobs that were lost at the beginning of the pandemic have been created since then, so that’s 650,000 people who had lost their jobs, who are now back at work or in work, which is good news. I know there are still a lot of people out there who are unemployed thanks to the pandemic. But there are also jobs available and certainly in the regions, farmers are still crying out for workers, we have still got harvest positions, we have created the temporary assistance package to help people go out and take a temporary harvest job. And I think people can look outside the box and we can start to get more and more people back into work, as we do recover. We are recovering at a faster rate than expected, but we’re not celebrating because there is such a long road ahead and we are concentrating on making sure that we can help Australia to recover.

MACMILLAN: Amanda Rishworth does the government deserve some credit here? Australia’s performing a lot better than a number of other countries around the world?

RISHWORTH: Firstly I’d make the point that the Government spinning out this sort of rhetoric is a slap in the face for the 2,000 Qantas workers that are about to lose their jobs, for the over a million unemployed looking for work. This sort of “just go to the regions and get a job” is not the reality of so many Australians that are struggling at the moment, and so many businesses. I think we have got to see it’s not surprising with restrictions easing that some businesses are getting back on their feet. But I speak to businesses, they are not able to employ as many people as they used to as a result of the economic downturn. They may not be eligible for JobKeeper, but they are not popping the champagne corks. They are struggling to keep their head above water, so this sort of rhetoric from the Government I think ignores the lived reality of so many Australians at the moment. So many people who are worrying about what is going to happen as they eat into their savings, as they use their savings to pay back business loans, or their mortgage, but are not sure what is going to happen when those savings run out. When we haven’t even peaked in terms of predicted unemployment figures, it is way too early to be popping the champagne corks with this kind of spin that the Government is doing.

MACMILLAN: Question Time is fast approaching, so we will have to leave it there, Amanda Rishworth and Perin Davey, thank you for your time. 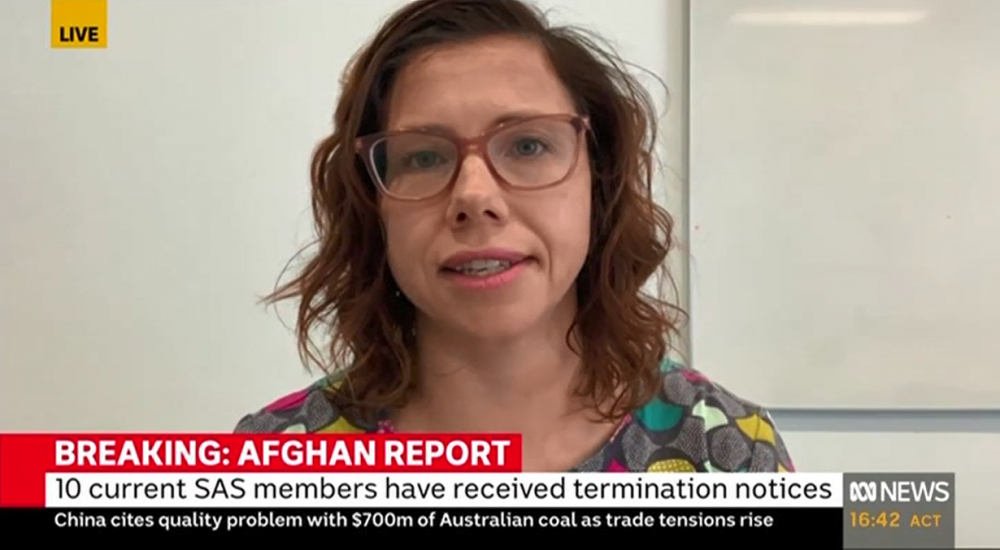