PATRICIA KARVELAS, HOST: Time now for my political panel, Amanda Rishworth and Liberal Senator Andrew Bragg. Welcome to both of you. Joe Biden has obviously secured the presidency in the United States, there has been a big focus on what that means for Australia today. Starting with you Andrew Bragg, clearly the US is going back into Paris, we know the UK would like Australia to have ambitious targets. Do you think it is time to commit to net zero emissions by 2050?

ANDREW BRAGG, LIBERAL SENATOR FOR NEW SOUTH WALES: It is great that the US going back into Paris, we have always been in Paris and we are on track to meet and beat our Paris obligations. The question of what we take to Glasgow will be determined in due course. But my sense is we can be as ambitious as our plan or our mechanism to get us as close to net zero can be.

KARVELAS: Why not just say it? Why is the government holding off on just making the commitment?

BRAGG: We have already committed to doing it it’s part of our Paris obligations, and so the question really is which year can you get there? And as you know our agenda is to put our plan in place rather than just claim a target without a framework. That is what people are looking for from politicians and governments, they want to see concrete plans to deliver rather than politicians promising glib things, frankly.

KARVELAS: So you are saying 2050 is your target for net zero emissions?

BRAGG: As you know part of the Paris Accord has an obligation to get to net zero in this century and so the question is, when will we get there? And we are developing a mechanism to achieve that.

KARVELAS: Amanda Rishworth, the Labor Party has been putting pressure on the government in relation to Joe Biden’s victory, but why should the victory of someone in another country have an impact on Australia’s domestic policies?

AMANDA RISHWORTH, SHADOW MINISTER FOR EARLY CHILDHOOD EDUCATION AND DEVELOPMENT: It’s just another country in which as part of the global race will be looking for investment in clean technologies, and that means jobs. So what I don’t want to be is a country that is left behind in this global race. We’ve got now our major trading partners, being the US the most recent with the election of Joe Biden, but the UK, South Korea, Japan, Europe, all being very clear that they want to be part of a global race for jobs. And I don’t want to see, and the Labor Party doesn’t want to see us miss out on that global race. There is also of course the issue that has been mooted by a number of these countries, about looking at putting carbon tariffs or other disincentives for trading with a country that doesn’t keep their obligations, doesn’t have targets that are in line with the rest of the world, doesn’t have mechanisms that are delivering. And so I think there is real concern that we are going to get left behind in what is a global race, and that could be to the detriment of our economy.

KARVELAS: Andrew Bragg, on a sort of personal political level, are you relieved Donald Trump is defeated?

BRAGG: I think certainly some of the approaches he took to issues and to people was I think unbecoming of the office, but I would say that a lot of his economic policies in terms of cutting taxes and cutting regulation I think were part of the reason that the economy was very strong, and I hope that that is the formula that is maintained in the new regime.

KARVELAS: Okay but you are saying he was unconventional, we know all of that but was it destructive to institutions, the international peace, working together? Do you think it was destructive?

KARVELAS: I want to change the topic to a story that is going to air tonight on Four Corners by reporter Louise Milligan, we haven’t seen it yet, but it talks about the Canberra bubble and it is a story around some behaviour there. The executive producer Sally Neighbour says extreme and unrelenting political pressure has been applied on the ABC before the investigation into the behaviour of federal parliamentarians. Starting with you Amanda, are you concerned about this?

RISHWORTH: Look I am concerned if these comments are correct, because the ABC has a strong, independent streak and so it should. It is our national broadcaster and it should be able to report without fear or favour. So if political pressure is being exerted on the ABC not to air things that politicians find uncomfortable, then I think that is deeply concerning and shouldn’t happen.

KARVELAS: What are your thoughts on this, Andrew Bragg,? It is concerning isn’t it for pressure to be put on an independent journalistic outfit about a story?

BRAGG: I think the ABC to the terrific job in the main, and there are some instances which I have pursued at Senate Estimates with the managing director where there has been in my view some instances of bias, but in the main the ABC does a terrific job. It is independent and it can conduct investigations and exposes and the like and that is what it can do as part of its remit. That doesn’t mean we can’t ask questions at Senate Estimates as part of the parliamentary process about whether or not the ABC is straying from its charter in relation to things like bias. But I think that is quite a different issue than what you are raising tonight or now.

KARVELAS: I think it is, because of course you can ask and so you should make go crazy, go complain about me, I would love it, raise my profile a bit, Andrew Bragg, raise it in Senate Estimates if I have upset you at all. But specifically on this story, would you be concerned? We haven’t seen it yet, I haven’t seen it yet, but if there was political interference saying hey don’t air this?

BRAGG: As I said, I think if there are cases of bias I think those are fair game for us to pursue. But if ABC is pursuing people and doing a good job as a media outlet that is fine. I’m not really sure what you want me to say here.

KARVELAS: That political interference is probably not appropriate if it’s to stop something airing.

BRAGG: I don’t think there would be political interference and yes that would be inappropriate.

KARVELAS: Amanda Rishworth, is Labor going to pursue this, is that on the agenda?

RISHWORTH: We’ve obviously got to see the outcome, obviously does get to air, are there any comments of things being cut out –

KARVELAS: It is definitely going to air.

RISHWORTH: If that is the case, then I think that we will be following it up because it does require a level of independence. And I’m not making this party political, all politicians need to be held to account and that is what our fourth estate is about, holding us to account. Holding us to account in terms of our behaviour and so if there is political pressure then am sure that our Shadow Minister will be into it in Estimates.

KARVELAS: Just before I let you both go, some final closing comments if we can on the sort of lessons of the US election. Over 70 million people voted for Donald Trump, as you know Andrew Bragg, it still looks like the US is very divided even if Joe Biden is providing unifying statements. What are the risks if those kind of concerns of those voters aren’t addressed? Are you worried about the sort of Trumpism, and what will continue to be kind of be a very partisan situation that of course can boil over to the rest of the world?

BRAGG: I would prefer Donald Trump’s domestic economic policies, but then I would prefer the US to be engaged in our region and engaged in multilateral institutions. So I think the underlying economic agenda of Donald Trump in terms of cutting taxes and cutting regulation I think is very attractive, and that will I imagine remain an important part of the Republican Party’s mandate over the next four years. That is I think something that the new President will have to contend with.

RISHWORTH: Joe Biden has made some really important statements about bringing voters together, including those that did not vote for him, I think that is a good start. A strong, united, United States that has its democratic institutions working is good for the world. I think it is good for multilateral institutions as Andrew has said, good for our region, and indeed the whole country. So I really hope – it is a big task I think, talking to people that live there, it is a big task that will have to happen to mend some of the divides and some of the hurt that people feel on both sides, and I really hope that President-Elect Joe Biden is able to walk the country through that.

RISHWORTH: And probably with some facts.

KARVELAS: Facts but also just respect. I think respect is key and this has been a respectful panel so we are modelling it, thank you so much for coming on the show. Shadow Minister for Early Childhood Education and Development Amanda Rishworth and Liberal Senator Andrew Bragg. 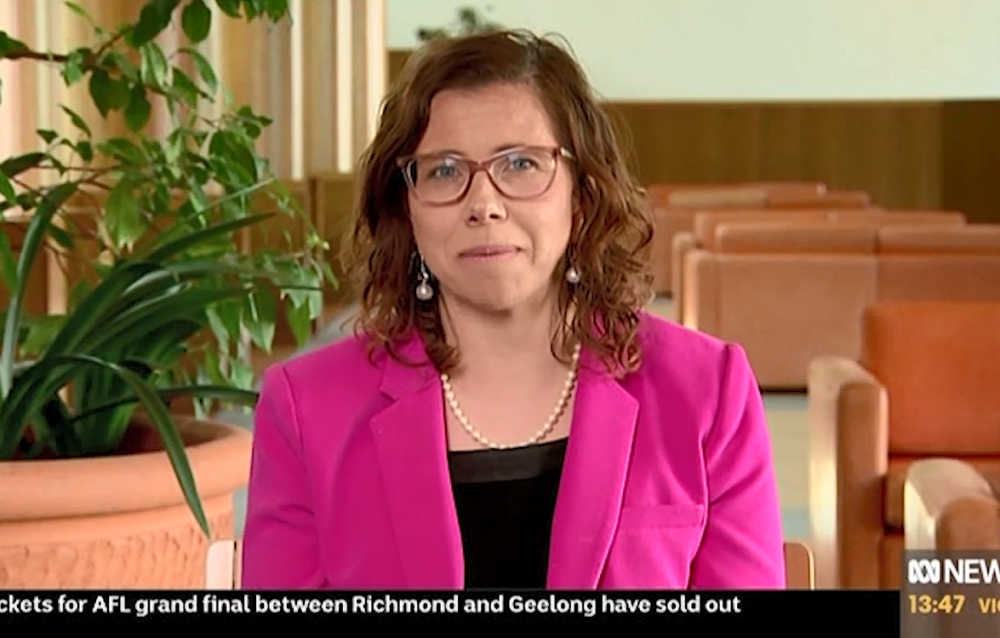