TOM CONNELL: Joining us now our political panel, Liberal MP James Stevens and Labor MP Amanda Rishworth, also the Shadow Minister for Early Childhood Education. Thank you both for joining me today. I might start with you Amanda Rishworth, climate policy has been a big discussion in your party this week after the call from Joel Fitzgibbon. What’s your view on adopting the Coalition’s target?

AMANDA RISHWORTH, SHADOW MINISTER FOR EARLY CHILDHOOD EDUCATION AND DEVELOPMENT: Of course this is the right time for Labor to be discussing what our policy is, but of course the real imperative if we’re going to see action on climate change is whether or not the Government will meet the Paris agreement. It’s targets are inconsistent with the Paris agreement, so I think really when we see a Government with emissions going up and no action on climate change, what we need to do is actually put pressure on the Government to meet its commitment that it signed up to and at this time when we see emissions going up and its target not able to be met, then we’ve got a problem.

CONNELL: That’s fine and you’ll keep asking those questions, but what about the call from Joel Fitzgibbon? He said to adopt the Coalition’s policy, do you agree?

RISHWORTH: He’s entitled to have a discussion but I want to see us meet the Paris climate change agreement. You can’t sign up to an agreement and then not actually meet that commitment. The Government’s targets are inconsistent with that agreement and they’re not even coming close to meeting their targets, we’re seeing emissions going up. The Government is the Government – they are the ones who have the lever to address climate change and while Labor can have a discussion about its policies –

CONNELL: But I’ll take it you don’t agree with Joel Fitzgibbon, is that a fair assumption?

RISHWORTH: I want to see us meet the Paris agreement, how we get there –

RISHWORTH: Well no it’s also about limiting global warming to less than two degrees, that’s what we want to see.

CONNELL: To get it to 1.5 that’s true, but the Australian Government’s commitment right now is just that lower end. You’re saying it should be more to meet the 1.5 to two degrees?

RISHWORTH: We should be meeting the commitment we’ve signed up to. Of course we should be limiting to under two degrees that’s what people signed up to, and it’s incumbent on the Government of the day if they’ve agreed to that target to actually meet it.

CONNELL: James, the Government has made that Paris commitment we are talking about. Without talking about emissions going up recently and so on, as it stands that commitment is about global action that won’t actually achieve what Paris is trying to. Is that a problem?

JAMES STEVENS, LIBERAL MEMBER FOR STURT: Well not according to Joel Fitzgibbon, he seems to think we’ve got it completely right. I mean a few months ago the Labor Party were telling us 45 per cent, now today or last night you’ve got Joel Fitzgibbon launching a sort of holy war within the Labor Party saying we should have the same policy position as the Liberal Government. So if Labor can’t even agree on the target amongst themselves, but want to suggest ours is incorrect, it’s just completely implausible. And we’re all a bit sick of them saying we are reviewing our policies.

CONNELL: Joel Fitzgibbon has said he doesn’t believe this will help achieve Paris but he’s talking about ending the political fight. As I say again, your commitment right now is part of global ones that don’t actually get Paris done. Isn’t that a problem?

STEVENS: Well no it’s not. The 26 to 28 per cent by 2030 is the Government position and that will honour our Paris commitments. There’s no debate about that within the Liberal Government and we’re focused on getting on with actually achieving it. And the point Fitzgibbon made quite accurately is instead of having these debates about percentages, it should be about achieving something. And we’ve got a policy position in place that will achieve the 26 to 28 per cent by 2030 and that will be a great thing.

CONNELL: But the UN itself running this the IPCC says the world is not on track with commitments made to meet Paris, that’s true is it not? Are you arguing against that?

STEVENS: Globally quite possibly, but in Australia to achieve 28 per cent that’s what our commitment, that’s our fair share of the burden under the Paris agreement.

CONNELL: But that’s why countries are being asked to do more, because we’re meeting what we said we would which is a figure we came up with, but the overall commitments don’t get us there. Is that not a problem?

STEVENS: Well no we will meet the commitments that we’ve made and 26 to 28 per cent is a very significant commitment and it’s one we should be focusing on achieving.

CONNELL:  Alright but you do see the problem, we aren’t meeting Paris anyway even if Australia says we’ve done our bit and the overall agreement falls short?

STEVENS: Well no I don’t, I think we should be meeting what we agreed to do and that’s what we’re focused on.

CONNELL: Alright but again the problem with not meeting the overall target, you can argue that Australia should do more or not, there’s a problem if Paris doesn’t achieve what it’s meant to surely?

STEVENS: If there are problems with the combination of what all nations are doing and them meeting their commitments, that’s not something we’re going to solve in this country through Federal Government policy. What we’ve got to focus on doing is what we committed to doing, which is our fair share the 26 to 28 per cent, and we’re getting on with that and focused on achieving it.

CONNELL: Alright and the UN’s point has been even if all countries meet it, some are not, we are still not going to get there. Anyway let’s move on to the situation in Syria, it seems pretty dire. The Government is saying it won’t go to the aid of Australians in refugee camps if that endangers other Australian lives. Some of these people seem to have gone there to join the caliphate effectively, is this attitude from the Australian Government fair enough?

RISHWORTH: I’m not privy to all the intelligence briefings, of course this is a very complex situation in Syria. We have people that have gone over to fight with the caliphate and we have innocent children who have been put in a very dangerous situation by poor decisions of their parents. So we have a difficult situation, of course we’ve always got to balance what is in our national interest and our national security’s interest, and so it is a difficult situation. Labor has said we want to work in a bipartisan way with the Government and part of that is understanding what the national security agencies are telling us, and I’m certainly not in a position being in opposition to be privy to that information.

CONNELL: Fair enough but if that’s we’re being told Amanda Rishworth, that it could risk Australian lives to rescue children caught up in this, is that a fair enough attitude to say well there’s risk there so we can’t go ahead with a rescue mission?

RISHWORTH: Well of course risk is something a government always has to weigh up and it is the Government that has all this information. I hope they are taking all the information and considering this in a very careful way, and making decisions based on our national interest and balancing risk. So I assume that’s what the Government is doing, I can’t tell you definitively either way, I hope that’s what they’re doing and I hope we don’t see this turned into a political football by the Government to try and win domestic support at home, I hope they’re taking this seriously and doing it in a diligent way.

CONNELL: James, on the flip side if it does turn out to be possible for Australia to have some sort of rescue mission for want of a better word to rescue the women and children, even though there are question marks about what the women were up to, should that be something Australia still does?

STEVENS: Every Australian citizen is entitled to proper support from the Australian Government when they’re in a difficult or dangerous situation, and yes clearly we’re talking about probably the most dangerous part of the world. It’s certainly going to be interesting if and when we do get access to these Australians to find out exactly what they have been doing in Syria, and we obviously need to make sure we’re balancing the rights of our Australian citizens if they’re innocent to support them and provide them humanitarian aid and get them back to the country. If it in fact turns out that they’ve been there for questionable purposes, then we need to make sure we’re protecting Australia’s national security and I know Minister Dutton will absolutely take that position.

CONNELL: So that means in this situation with those women, if it can’t be established that they’re innocent, they stay there for possibly a couple years even when a very heightened security situation there?

STEVENS: Well at the moment the situation is we don’t even have access to them, we’re not in a position to make those assessments. And we obviously have experts in Home Affairs and ASIO and others that can undertake those assessments. If it’s safe and they’re innocent and we can get them home, we should do everything we can to do that. The assessment needs to be undertaken first and at the moment that’s simply not possible. We shouldn’t be putting further Australians in danger by trying to access them in what is the most dangerous part of the world.

CONNELL: What did you make of Donald Trump’s decision to withdraw troops from Northern Syria?

STEVENS: It’s the President of the United States’ prerogative to make sovereign decisions about their armed force deployments around the globe and of course this decision involving withdrawing them. What’s been very disappointing and the Government has made this clear has been the behaviour of the Turkish Government since that decision was made.

CONNELL: That’s true but you can also comment on whether or not the sovereign decision made by Donald Trump was a good one.

STEVENS: Well not really because I wouldn’t want the Americans commenting on decisions our Government makes about our troop deployment, so I completely agree with the Prime Minister. At the end of the day, it’s a decision of the US President, he’s made that decision and now the Turkish Government had undertaken action they should be condemned for.

CONNELL: Amanda Rishworth your thoughts on this?

RISHWORTH: I think we need to – as a middle power and one that has an outward focus – do everything we can to see how we can keep stability in the region and make sure that it doesn’t become more of a humanitarian crisis than it already is. I think importantly restraint needs to be shown from all sides when it comes to this issue, and I think the international community does have a role to play in looking at how we can to the best of our ability keep stability in this region and ensure there isn’t further humanitarian crisis and indeed the rise of daesh or ISIS.

CONNELL: Just finally on this do you sense Scott Morrison won’t be criticising Donald Trump full stop about anything? 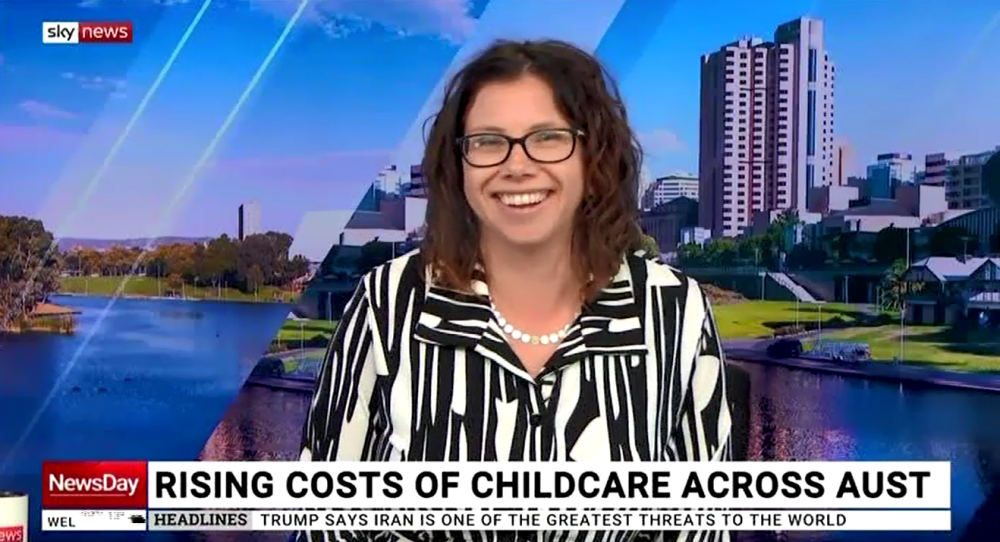