ANNELISE NIELSEN, HOST: Joining us now is Shadow Minister for Early Childhood Education Amanda Rishworth, and Liberal MP Julian Simmonds. Thank you both for your time. Amanda I’ll go to you first, are you keen to download this app and do you have any concerns about the privacy implications?

AMANDA RISHWORTH, SHADOW MINISTER FOR EARLY CHILDHOOD EDUCATION AND DEVELOPMENT: I have downloaded the app, I think it’s an important step in the fight against COVID-19. Obviously the Government has been talking with the Labor Party. There are continued privacy concerns that individuals have, the Minister for Health has activated some of his powers to actually address those privacy concerns. But going forward we need to make sure the legislation that is associated with this thoroughly addresses privacy concerns out there. It is an important step in the fight against COVID-19 and addressing those privacy concerns, such as making sure this data is not shared with third parties other than health officials to conduct contact tracing, is quite important.

NIELSEN: Julian Simmonds what do you make of concerns about the privacy implications? The protections are supposed to be in legislation but the app has been introduced a few weeks before the legislation is going to hit Parliament.

JULIAN SIMMONDS, LIBERAL MEMBER FOR RYAN: Those protections are in place and will be enshrined in legislation. I don’t like to see people hedging their bets like Amanda has done and the Labor Party is doing. There are no concerns about privacy when it comes to this app, in fact the data will be some of the best protected that we have in this nation. The overwhelming feedback I’ve had in my electorate is how do we get involved in the fight against COVID, how do we support those people on the frontline (inaudible). Downloading the app is a really simple process, I’ve done it (inaudible), exactly how you can do it and support those people on the frontline. Over one million Australians have already done it, I know they’re going to rise to this challenge and help get us back to some normality.

RISHWORTH: I have to say dismissing privacy concerns – I don’t think anyone is hedging their bets. We know that when things get done there does need to be scrutiny, that’s what a Parliament is for, that’s what Senate Committees are for. I think minimising people’s concerns – they need to be reassured and ensured everything is in place. We’ve been working constructively with the Government, so trying to take political potshots here Julian is really unhelpful.

SIMMONDS: I’m not Amanda but I think you could easily say as I have said that the Health Minister has gone through all those privacy protections, they are in place as the Act currently operates. The last thing we want is for people to listen to you and think they can’t download the app until Parliament goes back in May and the legislation is put through the Parliament. That is simply not the case, those protections the Health Minister has outlined are significant and currently in place, and the message from all Parliamentarians from both sides of Parliament should be it’s safe, you should be downloading this app right now to help your mates, to help Australians to get out country through this. We are the envy of the world with how we have dealt with this COVID-19 situation so far, and if we keep testing, if we keep downloading the app, we will continue to be the envy of the world.

NIELSEN: If we can move onto schools this is becoming an increasingly contentious issue as different States go different ways. Amanda Rishworth what do you make of Queensland in particular, it seems they’re more on the front foot with this than anyone else. Do you think it is safe for kids to be going back to school?

RISHWORTH: Everyone has to listen to their Premiers, Premiers and State Governments run the school system and they have access to the best medical information. Of course it’s different in every State, in fact South Australia has encouraged students to return to school this term. So it is different in every State and Territory. What I would say is we of course urge all States and Territories to make sure, based on the health advice, that they have an appropriate amount of soap, hand sanitiser, and safety measures in place. But parents do have to look to their Premiers and to their local situations.

I would say though this has become a debate in which we haven’t really celebrated and thanked teachers. Teachers have worked incredibly hard, whether that is to go back to the classroom, whether that’s to prepare online. They’ve done an amazing job and we all, whatever the circumstances, need to make sure everything is in place for their safety, follow the medical advice, and really thank them for the work they’re doing in educating our children.

NIELSEN: Julian Simmonds, Amanda raises an interesting point there. You can’t expect teachers to go back to school if there aren’t appropriate protections like hand sanitiser and other protections to make sure it is a safe workplace.

SIMMONDS: Of course those measures should be in place, like workplaces all across the country including my own office here, we have hand sanitiser and masks and other things like that in place. Annelise I just don’t get this, you’ve got the Chief Medical Officer Brendan Murphy saying schools are safe, you’ve got the Principal Medical Committee saying social distancing as we know it and are practising isn’t required in schools. You’ve got parents working from home, working very hard to hold down their jobs in this tough economic environment also being asked to home school their kids. And we’ve got fantastic teachers as Amanda said, who want to get back to the classroom to do their best work for their students. I just don’t understand why the Premier isn’t showing a bit of leadership and following that health advice of our Chief Medical Officer and allowing parents who are working in this environment, whether from home or the office, to take their kids back to school.

NIELSEN: Amanda Rishworth unions representing teachers have really not been in lockstep with the Government on many of these steps. It raises an interesting point that Julian Simmonds was touching on, should they be more proactive in getting teachers back to school?

RISHWORTH: The unions are there to represent their members and they’ve raised a number of different issues about appropriate hand sanitiser, about social distancing. Indeed there’s been confusing messages, the Prime Minister has weighed in, a whole range of people have weighed in. So I think it’s important the unions are there to represent the views of their members, but what parents should do and teachers should do is look to their local school system. There are different conditions in every State and Territory, and the Premiers run these systems and they have to put in place what they think are the right arrangements.

SIMMONDS: Amanda you talk about confusing messages, but this is why parents are confused because you have a Prime Minister and Chief Medical Officer saying schools are safe, and the Premier in Queensland appears to be listening to the unions. It doesn’t make any sense.

RISHWORTH: Once again I don’t think this political barney is really important.

SIMMONDS: Parents, teachers, and the Health Officer wants to see kids back in school. I don’t understand why we wouldn’t listen to the medical advice.

RISHWORTH: I think everyone wants to see children back in school, it’s ridiculous to say otherwise. The States and Territories are responsible for working out how people transition, how children transition back to school, every State and Territory is responsible for that. I don’t see the Prime Minister having to roll out this program across the country, it’s the States and Territories that have to look at their local circumstances and ensure it’s safe to do so.

I would look to the Premiers and Chief Medical Officers in each State and Territory, and in South Australia the advice is schools are open and children are encouraged to go back. It’s different in every State and Territory and somehow making it into a political barney Julian I think shows you’re trying to score political points, rather than have a considered and respectful debate about these things.

NIELSEN: We might leave it there Liberal MP Julian Simmonds, and Shadow Early Childhood Minister Amanda Rishworth, thank you so much for your time. 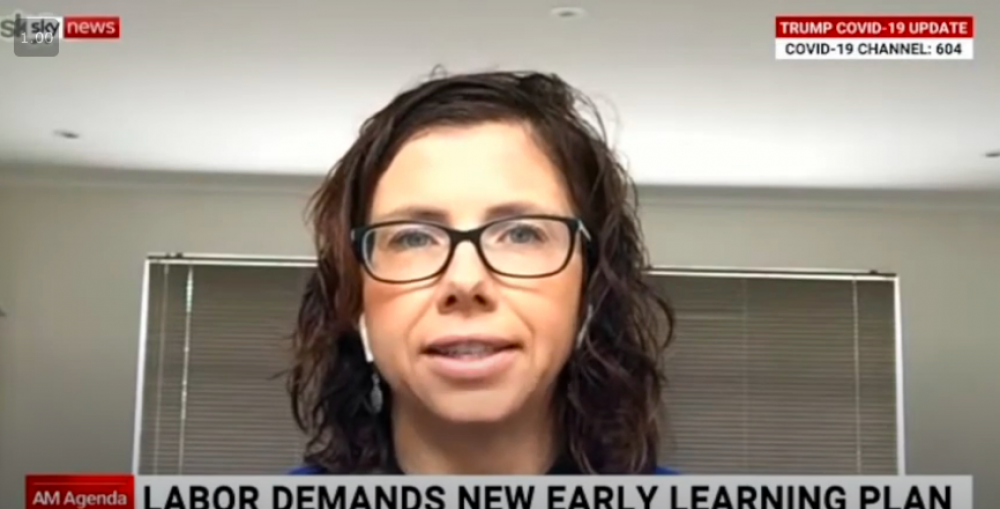