DAVID BEVAN, HOST: Thank you for both setting out time. In the next few minutes I just wanted to ask you both to help us get our head around this superannuation debate. Which I think is summed up by the question – do you want the next increase, whenever that might be, now in your pocket, so you could spend it, maybe put it aside for a house deposit or whatever, or do you want it in your superannuation? Tony Pasin, what is the government position? And when will this have to be decided?

TONY PASIN, LIBERAL MEMBER FOR BARKER: Well firstly, good morning Amanda and happy new year to you. Well David, the current trajectory sees super paid at a rate of 9.5 per cent. The slated increase of half of a percent is scheduled to take place or begin on the first of July this year, that is 2021. And the consideration will need to be made between now and then relative to the economic circumstances we find ourselves in, in terms of what may or may not occur in relation to that. And I think it’s important to note that it is six months away from that date and if 2020 taught us anything it taught us that we need to remain flexible and agile because nothing is as certain as it used to be.

PASIN: I think the fairest way of explaining it is that if no action is taken, then the increase occurs on the first of July. The issue being considered currently is this – we’re obviously in very difficult economic circumstances, and as the governor of the Reserve Bank has made clear super increases are effectively a trade off, and that trade off is against wage increases. So the challenge at the moment, and there’s no money tree out the back of small businesses, particularly not at the moment, but I’d say large businesses as well. And so the question becomes one of, well, if we thrust this increase on the economy, on employers, then what impact is that going to have on jobs? So we need to be very careful about this, because the last thing we want in this very delicate recovery is to create a circumstance which will put people’s jobs at risk. And I know others will say “oh well it’s legislated” but these are very different times than the times in which we set them, and indeed they’re very different times from 12 months ago even.

BEVAN: So are you saying you could say to employees “no, you don’t have to give any increase, not for super and not in people’s pockets”? You just don’t have to come up with that half a percent wage increase?

PASIN: I’m certainly not saying that. What I’m saying is that we need to consider the circumstances very carefully over this period, this six month period is a particularly delicate period. What I do know is if no action is taken, and that may well be the outcome of deliberations, then we’ll see half a percent increase in super, which of course is your listeners’ money, but it’s deferred, at least access to it is deferred, until the age of 65 or 67. So there are a couple of questions operating at the moment. Do we proceed with the status quo, but equally, as you indicated in your introduction, is a more appropriate setting just at the moment is allowing people to have access to that money now, rather than deferred off into the future? Given that we are about creating that economic activity and that stimulus here and now.

BEVAN: Amanda Rishworth, what do you think?

AMANDA RISHWORTH, SHADOW MINISTER FOR EARLY CHILDHOOD EDUCATION AND DEVELOPMENT: Well firstly I’d say that we’ve had this super increase delayed many times over the last number of years. Tony Abbott delayed it, it was delayed again. There always seems to be an excuse as to why not to pay this superannuation increase. And we know that yes this is a difficult economic time, but we will also face difficult times in the future if people are not set up properly for retirement. If we’re saying there’s a choice – do you take it now or do you take it later – we’re actually saying what’s the point of superannuation? And the point of superannuation is very clear – if people have money in their pockets now, they’re likely to spend it, which means they’re not set up for retirement. We then have to tax more, because everyone will rely on what many would say is an insufficient pension system. So, especially when we’ve got an ageing population, this puts us in a very precarious, difficult time into the future if we scrap our superannuation system and the compulsory element of it.

BEVAN: It really sounds like there are three options, not the two that I first stated. I said take it now, take the half percent increase in your pocket right now, or put it in your super. Well the third option is we say that nobody’s getting half a percent increase, because it’s just too tough for employers to find that money. So there is a third option, you don’t get anything.

RISHWORTH: That’s right, and this has been discussed quite a lot. The third option you identified has been the first issue that’s really been argued, and that is it’s too tough economic times. And that’s been argued on many occasions, we’ve had this superannuation increase delayed now for over seven years and there’s always been the argument that this isn’t the right time. Well that just doesn’t cut it when we’re looking at long term support for workers to retire in a comfortable way, not to be relying on the pension system, the public pension system, and to actually retire with some dignity. So I don’t think that’s a very good option. I think it is a modest amount that we’re talking about, half a percent. And I think we do need to, when we’re in these circumstances, look at the long term as well. If you look at what superannuation has done in terms of acquiring that wealth for workers, it’s also gone to prop the economy up. We’ve seen that the capital investment made by superannuation has actually provided a stimulus in difficult economic times, such as purchasing Australian assets like ports. So I think we’ve got to not be too short sighted when it comes to this debate, and actually look at the fact that this has been delayed, the delay hasn’t led to increasing wages, there’s been stagnant wages growth. And I think we’ve got to bite the bullet and actually say we need to continue this programme for the long term because it has long term benefits for workers and the economy.

BEVAN: Tony Pasin, after nine o’clock we were talking about how uneven the economy has been during the pandemic. Some people have actually made big profits and are going gangbusters. If you’re making masks what a great time to be in business. And some retailers have done really well, while others have struggled. And it’s not clear how the next few months are actually going to be panning out. What sort of a stimulus would it be, because we know wages are so flat, if I go you did say you’ve got to come up with a half a percent increase, and we put it in your pocket.

PASIN: You’re right, David, and the economy is very patchy and if you look at the residential home building market, it’s going gangbusters. But like many things that are operating in the economy at the moment, that’s because of some government stimulus, or at least it’s being assisted along by government stimulus. The point here is as that stimulus wanes, we don’t know exactly how the economy will react. So the point at which this decision should be made is much closer than the first of July, that’s the first thing to say when we’ve got a better read. We’ve done so well during COVID because we’ve waited and got the best evidence possible, as close as practical to the deadline for making the decision. But in terms of this, let’s be clear, wages have been flat. But if what we do is we force a half a percent increase on employers, then I think it’s certain wages today will continue to remain flat, because there just isn’t enough capacity at the moment, in my view, subject to what we see over the next three to four months, to do both. So it really is a choice between one or the other. And while we’re talking about superannuation, I think this six months is a great opportunity in light of the pandemic, in light of the difficulties, for us to have a real think about where we sit in terms of this. And for example, and just floating a proposal out there for your listeners, I think the hardship cases I see, and I’m sure Amanda is the same, are people that don’t own their own home. If they end up on a pension, and own their own home, life is still difficult, but it’s not so difficult. I think one of the things we should allow people to do is access some portion of their super to enable them into their first home, because I think that’s the best investment you can make for today and for the future.

BEVAN: Amanda Rishworth we’re only a minute away from the 10 o’clock news, but what do you think of that idea?

RISHWORTH: Look that’s been rejected many, many times, even by the Prime Minister himself, because it doesn’t do what universal super has been set up to do and that is provide a comfortable retirement. And of course, the government if they want to abolish compulsory superannuation and get people to spend it before retirement, will need to outline their plan of how the smaller number of taxpayers are going to cover the millions more pensions that will be required as a result. That’s a simple proposition. They can’t kick this can down the road and say “we’ll deal with it when it comes”, because we know that the pension isn’t adequate for many people, and for many others relying on the pension is just not good enough. And how will the country pay for it? That’s the big question if they want to dismantle the superannuation system.

BEVAN: Amanda Rishworth, thank you for your time. 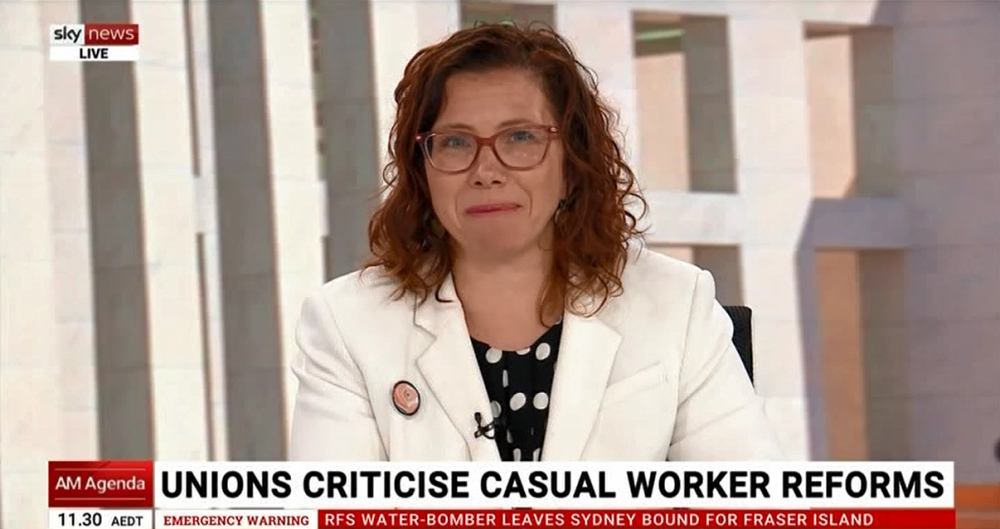