Parliament – child care left out of the Budget

We have a government that has delivered a trillion dollar debt in its budget earlier this month. It was chock-full of marketing opportunities, but none of the announcements that they’ve delivered lets them stand at a doorstep with 51 per cent of the Australian population. Not one of their announcements in this budget supports Australian women to get back to work.

The Prime Minister said this week, or last week perhaps, ‘If you’re good at your job, you will get a job.’ Except that the Prime Minister didn’t really mean that. He seems to only be referring to his Liberal Party hacks getting jobs, because if he said what is actually happening, he would have said, ‘If you’re the second income earner, have young children and are lucky enough to have a job you’re good at, we’re going to make it harder for you to take on more hours.’ In question time today the government said that they will act quickly to ensure that Clive Palmer’s luxury jet stays in the air, but in this budget women barely got a mention. But, of course, we all should be lucky, as Australian women, that we get to drive on roads. I think that is something that all Australian women will be eternally grateful for.

Of course, in this budget, there is nothing in it to fix the child-care system. The budget did nothing to fix the system that is now so expensive many families are having to choose between working for nothing or staying at home. There was nothing in this budget to recognise the barriers to workforce participation, particularly for women working on the fourth and fifth day. According to the Prime Minister, his job is done. The system is working and women have never had it better than under his government. Well, tell that to the hundred thousand families that are locked out of the system because they just can’t afford it. Tell that to the families that have had their fees jacked up by 4.5 per cent in the last year, pushing up out-of-pocket costs to over twice the rate of inflation. Tell that to the many families that see a system that is becoming absolutely impossible to access or more expensive every day. It’s a system that is so expensive that half of families say it impacts on their weekly grocery budget. It’s a system that has built-in design faults that acts as a barrier to second income earners working more.

The Prime Minister’s system penalises women who want to work full-time. We’ve heard case studies from many women about how the cost of child care is holding them back from working more days. Today we continue to hear more and more stories. We hear, for example, Melanie, who has two children and says that, after childcare costs, she only takes home $150 of pay. Melanie says it’s hardly worth it.

But don’t take our word for it. Labor has been talking about this over and over because that is what we hear in our constituencies every day. Let’s take the CEO of the Business Council of Australia, who said before the budget: ‘We’ve got to fix the childcare problem. It’s absolutely essential.’ Of course we agree. But it is also a massive handbrake on small and family business, and last night the small and family business ombudsman told Senate estimates that child care is a matter of significance for 38 per cent of small businesses that are owned by women. She pointed out that many small businesses are started by women when they are home on parental leave. She reported that many women grow their business from a micro stage at home but can’t take the next phase because the cost of child care is too high. She said: ‘You can’t be an entrepreneur and work three days a week. It’s just not possible.’ She also said that the cost of child care is just too high. It’s a productivity issue and it’s something that needs to be addressed. Small business is the engine room of the economy, but this government won’t even let women into the car. Women want to be entrepreneurs. They want to have a go, but they’re not getting a go under this government. Why is the Morrison government holding them back?

We will rip up the Prime Minister’s annual subsidy cap, which has been such a barrier to work. Labor will ask the ACCC to look at price regulation mechanisms and shine the light on costs and fees. We will put the Productivity Commission to work on a comprehensive review of the sector with the aim to implement a universal 90 per cent subsidy rate. In short, we will fix the Prime Minister’s busted childcare system and we will fix it for good and leave an everlasting legacy for our country.

We will take the shackles off the current system. Women will be off to work more days, spend more time on their small business and get more money in their pocket. Australia will only pay off the trillion dollars of Liberal dependent by growing our economy, and our policy will happen do that. This Liberal government pretends that it is the friend of small business. It goes around getting pictures with small business, bragging to everyone that will listen, but they are not listening to small business. They assume that women aren’t necessarily working in small business, that they don’t need childcare support and that they don’t want to actually work more and on more days, because it was the Prime Minister’s own system that was designed to make women work for nothing on the fourth and fifth days. We on this side of the House want to see small business succeed. We want to see women entrepreneurs getting a go, unlike what was exposed in question time today.

The Liberal Party say a lot about small business and women entrepreneurs. They love an announcement, they love a bit of spin. But they announce something in 2018 and they are not prepared to deliver it until 2021. That is not the type of support that small business and women want. They want support now. They’ve got good business ideas, and what they need is a government that will support them. Unfortunately they don’t have it. They have a budget that leaves so many Australians out and holds so many Australians back. We on this side are very proud that we are putting up a plan for the long term when it comes to child care. We are very proud of our plan to have a future made in Australia. These are the things that Australians are talking about.

The Prime Minister was also exposed in estimates today. He told The West Australian that he had to do a marketing strategy to try and get taxpayers to understand, and only then would he actually found some childcare changes. But the minister at the table in estimates today confirmed that there is no plan to have any new reform in child care. The minister at the table today also clearly said that there was no plan for any marketing strategy. So this Prime Minister talks from one side of his mouth and then he talks from the other side. You cannot trust anything this Prime Minister says. It’s all about marketing, it’s all about spin. 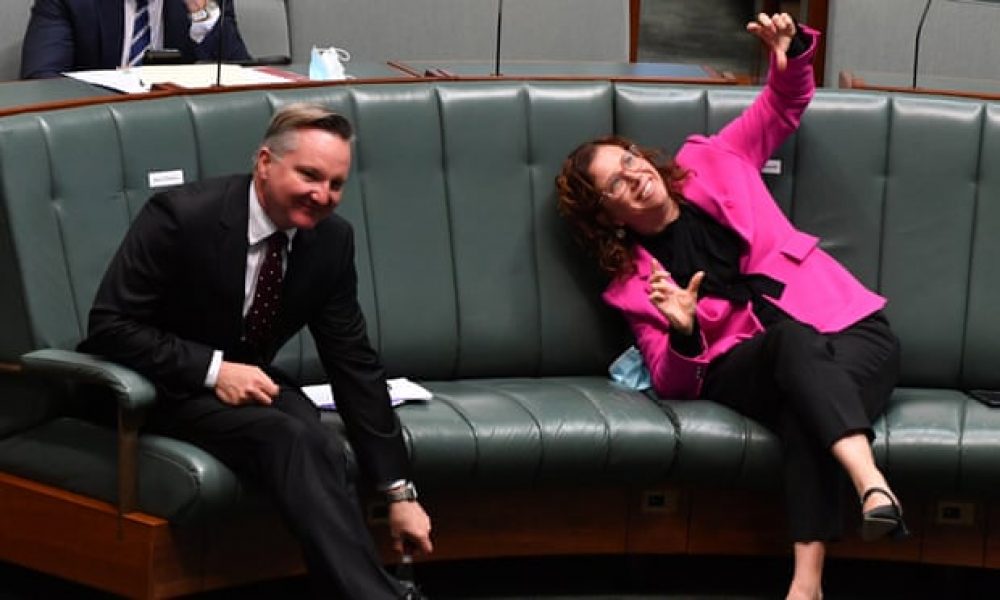