HOST: I started by asking Amanda is this the right call to make to end free child care now?

AMANDA RISHWORTH, SHADOW MINISTER FOR EARLY CHILDHOOD EDUCATION AND DEVELOPMENT:  What’s been disappointing is the response from the Government. While the current system was making it difficult for families to get into the system and for some providers, snapping back to the old system, a system that has some of the highest fees in the OECD, is not the right call either. We know a lot of families struggled with child care costs before the COVID-19 pandemic, so now going back to that system in a time when people are doing it really tough in terms of the economy, their pay packets, underemployment and all the rest, this is going to have a really, really big impact on families and cost of living.

HOST: Isn’t there potential for some more confusion if you try to change it now, rather than with about a months’ notice going back to the old system and have the discussions, have the arguments, have the debates around fixing the child care system and how it’s funded after we’re through all of this?

RISHWORTH: I think the real danger here is many people have had a significant reduction in their income, and they’re being asked now to fork out for very high fees, and that could well mean we do not have the economic recovery we are hoping for. It may mean that families actually decide “we can’t take that extra shift”, or “we can’t take that job”, because child care is just so unaffordable. And that in itself will be a barrier to work and actually put a handbrake on economic recovery. So I think while absolutely there does need to be a long term solution when it comes to affordability and child care, this is the worst time to be going back to such an unaffordable child care system.

HOST: The Minister’s point is it’s done what it was designed to do, we’re in a far better spot with the virus than we thought we’d be at this point so there has to be an end date, 12 July is still just over a month away so there’s a lot more time for businesses to start to recover and households to start to recover.

RISHWORTH: I don’t think anyone is believing we are in the same economic position as we were in February. So many businesses are still not opening, economists are saying it’s going to take years for us to recover from this, there’s people who have taken pay cuts and a cut in hours, so I just think it’s very premature to be snapping back to the old system. What we might see unfortunately is people then starting to withdraw their children from early education and care because it has just become unaffordable. So I just think that there were measures the Government could have put in place to actually make this a much better transition and to recognise the economic circumstances we find ourselves in. Because even with the improvements and recovery we have had, it’s pretty minor compared to the overall economic outlook.

HOST: It sounds like you would have preferred this free child care scheme to last forever? Is that feasible, is that fair?

RISHWORTH: What I’m saying is we need to really focus on two important pillars, one being affordability and one being accessibility, and the Government has failed on that. There are a number of organisations, universities out there that were putting out different models. So it wasn’t just about saying this current system would just continue and continue, there were a number of models that were put out or adjustments that could have been made, whether that’s to the current system or the old system. They could’ve supported families more but we haven’t seen those provisions put in place, instead we’ve seen them go straight back to the old subsidy scheme with no adjustment.

HOST: I mean there’s a slight adjustment, there’s an adjustment to the activity test and there’s extra support and payments, $700 million or so of a support package to help keep people employed, so to help ease the cost burden on the operators of the centres.

RISHWORTH: Certainly there’s been support for the sector and I’ve welcomed that, although we have to recognise at the same time that Jobkeeper has been taken away and I want to work with the sector to understand the full impact of that and to make sure educators are supported. So while the Government is giving some support, they are taking that Jobkeeper support away so I think that’s an important point to make. And yes the activity test, but if you’re on Jobkeeper or Jobseeker and paying $30 a day for child care it’s going to be a lot coming out of your pocket. So while the activity test has been changed, there’s been nothing in this package to help ease the burden of fees. And if we just look at how much fees have been going up, in the latest data prior to the pandemic fees went up by 7.2 per cent, that’s three time the rate of CPI. So it’s a huge impact even before this pandemic, so now it’s going to have an even bigger impact on families.

HOST: So instead of 50 per cent increase it?

RISHWORTH: That’s a potential, there’s the potential to explain the ACCS program, that’s where all of child care fees are covered for certain families. You could certainly look at those families doing it the toughest. In terms of the Government’s previous program, extending it to families that couldn’t get in because we know a lot of families couldn’t get in, so they certainly could have targeted that better. There’s a range of options on the table, keeping within the current parameters but actually addressing affordability and supporting families in a much more direct way.

HOST: Did it surprise you to hear so many more children were back at child care now?

HOST: Thank you for your time this afternoon. 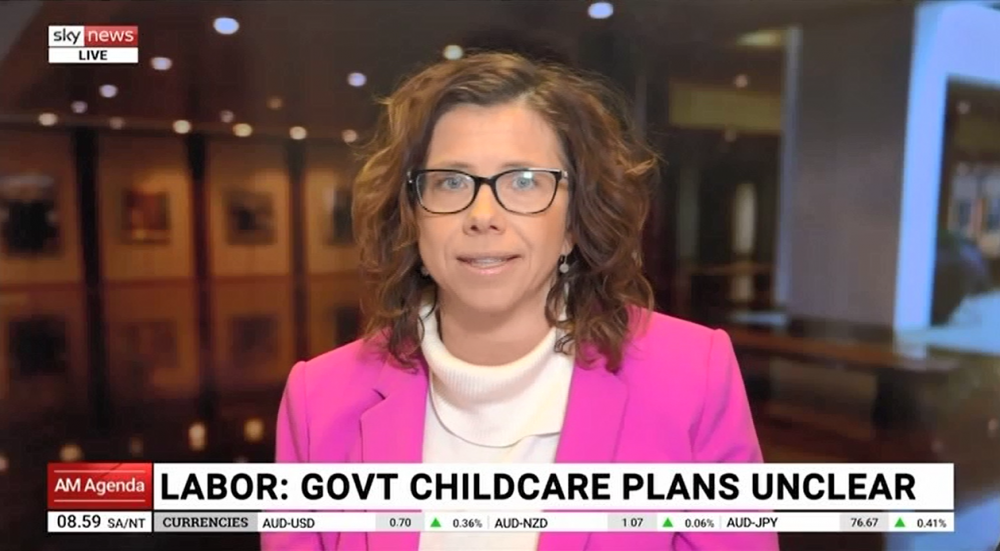